The frame, front fork, handlebar, saddle and front fork assembly are the main body of the bicycle. The transmission part includes pedals, cranks, sprockets, chains, bottom brackets and flywheels. The pedals are stepped on by humans, and the wheels are driven to rotate through the above transmission parts to drive the car forward.
2. Action part: namely front and rear wheels, including front and rear axle components, spokes, rims (rims), tires, etc.
3. Safety devices: including brakes (brakes), lights, bells, reflection devices, etc.
According to needs, some accessories can be added, such as brackets, hangers, safety forks, mudguards, air cylinders, etc. In addition, sports cars, racing cars, mountain bikes, etc. equipped with a transmission mechanism are also equipped with a transmission controller and front and rear derailleurs.
4. The composition of the hand and foot dual power bicycle: an alloy box is added to the frame of the traditional bicycle. The box contains various transmission parts. Through the interaction of forces, the hands and feet dual power, simple push and pull are realized. The handlebar moves, so that the car can move forward with the handlebar, which not only saves effort, but also exercises.
Part
1. The frame parts are the basic structure of the bicycle, as well as the skeleton and main body of the bicycle. Other parts are also directly or indirectly installed on the frame.
There are many structural forms of frame components, but the overall structure can be divided into two categories: men's frames and women's frames.
Because the bicycle is driven by the human body's own driving force and riding skills, the frame becomes an important structural body that can withstand the impact load generated by the bicycle during driving and whether it can comfortably and safely carry the human body. The manufacturing precision of the frame components The pros and cons will directly affect the safety, stability and briskness of riding. Generally speaking, the spokes are of equal diameter. In order to reduce gravity, there are also variable-diameter spokes with large ends and small middle diameters. In order to reduce air resistance, the spokes are made flat and streamlined.
2. Tires: There are two types of soft-sided tires and hard-sided tires. The soft-sided tire has a wide cross-section, can completely wrap the inner tube, and has a relatively large landing area, which is suitable for driving on various roads. Hard-sided tires are light in weight, have a small footprint, and are suitable for driving on flat roads. They have the advantages of low resistance and light driving.
The pattern on the tire is to increase the friction with the ground. The tires of mountain bikes are very wide and the pattern is deeper, which is suitable for off-road and mountain use.
3. Pedal components: The pedal components are assembled on the left and right cranks of the central axis component. It is a device that converts the horizontal force into rotation force. When the bicycle is riding, the pedal force is first transmitted to the pedal components, and then the pedal The axle rotates the crank, chainring, bottom axle, and chain flywheel to rotate the rear wheel, thereby enabling the bicycle to move forward. Therefore, whether the structure and specifications of the pedal components are appropriate will directly affect whether the rider's foot position is appropriate and whether the bicycle can be driven smoothly.
Pedals: can be divided into integral pedals and combined pedals. No matter what style of pedals, they must have a pedal surface, must be safe and reliable, have a certain anti-skid performance, and can be made of rubber, plastic or metal materials. The pedals must be flexible. 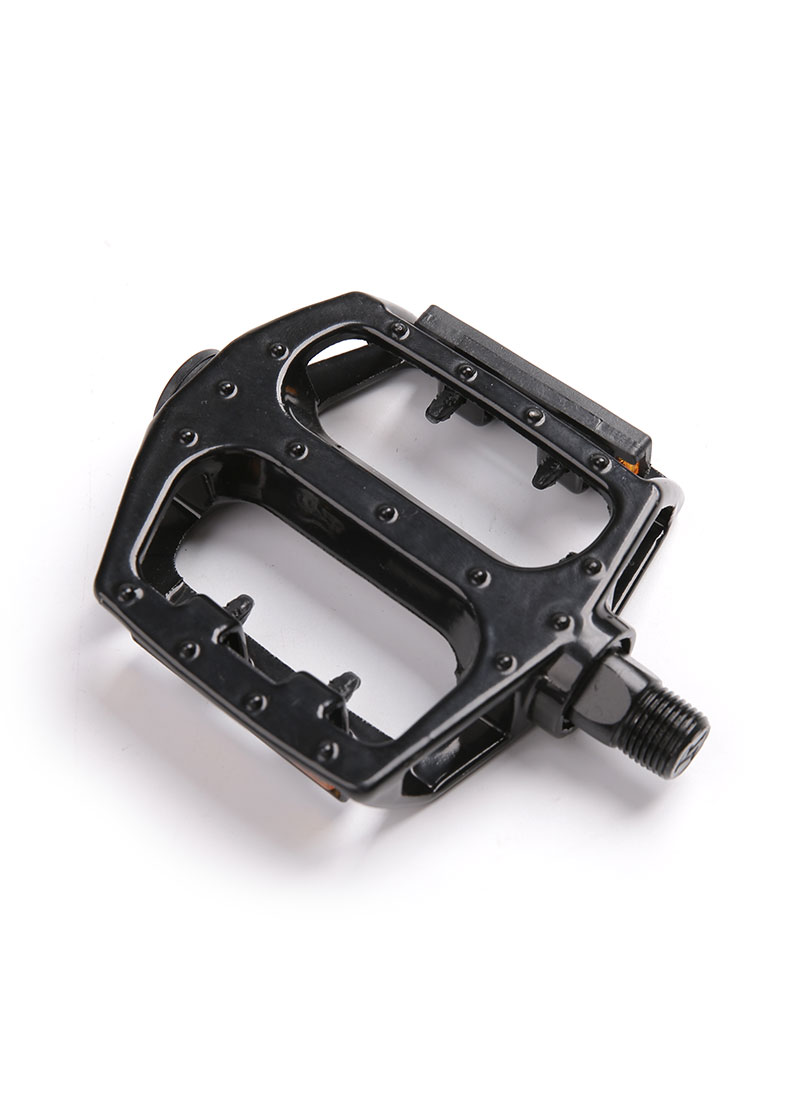 4. Front fork component: The front fork component is in the front part of the bicycle structure. Its upper end is connected with the handlebar part, the frame part is matched with the front tube, and the lower end is matched with the front axle part to form the bicycle's guiding system.
Turning the handlebars and the front fork can change the direction of the front wheel, which plays a guiding role for the bicycle. In addition, it can also play a role in controlling the driving of the bicycle.
The force of the front fork is a cantilever beam, so the front fork must have sufficient strength and other properties.
5. Chain: Chain is also called car chain or roller chain, which is installed on the connecting wheel and flywheel. Its function is to transfer the pedaling force from the crank and the sprocket to the flywheel and the rear wheel to drive the bicycle forward.
Sprocket: made of high-strength steel to ensure that it reaches the required tensile force.
6. Flywheel: The flywheel is screwed and fixed on the right end of the rear axle with internal threads, keeping the same plane with the sprocket, and is connected with the sprocket through a chain to form the driving system of the bicycle. From the structure, it can be divided into two categories: single-stage flywheel and multi-stage flywheel.
Single-stage flywheel, also known as single-sprocket flywheel, is mainly composed of outer cover, flat gear and core, jack, jack spring, washer, wire stop and steel balls. The working principle of its single-stage flywheel: when the pedal is stepped forward, the chain drives the flywheel to rotate forward. At this time, the inner teeth of the flywheel and the jack are involved, and the rotating force of the flywheel is transmitted to the core through the jack, and the core drives the rear axle and The rear wheel turns and the bicycle moves forward.
When the pedal is stopped, the chain and the jacket do not rotate, but the rear wheel still drives the core and the jack to rotate forward under the action of inertia. When the pedal is reversed, the jacket rotates in the reverse direction, which will accelerate the jack. The sliding makes the "click" sound more swiftly. Multi-stage flywheel is an important part of bicycle transmission device.
The multi-stage flywheel is based on the single-stage flywheel, adding several flywheel pieces, combined with the sprocket on the bottom axle, to form a variety of different transmission ratios, thereby changing the speed of the bicycle.
PREV：What is the principle of bicycle handlebars?NEXT：Introduce you how to install the mountain bike bottle cage